Autografts, allografts, bone graft substitutes, and bone replacement materials have been utilized in isolation or in combination to fill bony defects and enhance fracture healing or arthrodesis in all subspecialties of orthopedics. Although there is a robust literature on the effect of bone grafts on managing large bone defects in long bones and arthrodesis, little has been published on the management of calcaneal bony defects. In this review, we aim to discuss the various options for calcaneal bony defects and the current clinical evidence behind each graft option.

Conflict of interest: None

Bony defects that alter the alignment, height, and/or width of the calcaneus can lead to significant changes in gait mechanics, pain with weight-bearing, and may ultimately result in a secondary amputation.1,2 Accordingly, surgical management must be carefully planned regardless of the bony defect’s etiology (trauma, fracture nonunion, infection, or tumor).3 The surgeon should consider the quality of surrounding soft tissues and blood supply, the size of the defect, and patient factors (age, presence of comorbidities, nutritional status, and smoking) prior to selecting an appropriate surgical graft option.3

Autografts, allografts, bone graft substitutes, and bone replacement materials have been utilized in isolation or in combination to fill bony defects and enhance fracture healing or arthrodesis in all subspecialties of Orthopedics.4,5 Although there is a robust literature on the effect of bone grafts on managing large bone defects in long bones and arthrodesis, little has been published on the management of calcaneal bony defects.

In this review, we aim to discuss the various options for calcaneal bony defects and the current clinical evidence behind each graft option.

Autograft has been the gold standard in managing bone defects due to its osteoconductive, osteoinductive, and osteogenic properties.5 Commonly described harvest sites for nonvascularized autograft include the iliac crest and proximal tibia.3 The main difference between the sites is the volume of the graft obtainable. The iliac crest provides the most, at approximately 30 mL, and can provide coverage up to 5-7 cm of uncontained or contained defects.3,6 Autogenous iliac crest bone graft (AICBG) has been well published in hindfoot arthrodesis, with union rates greater than 90%.5,7 However, harvest site morbidity can be a disadvantage.3,8

Bone marrow graft harvesting from the femoral or tibial shaft using a reamer irrigator aspirator (RIA) has been gaining popularity in recent years as it provides high union rates with potential for less harvest site morbidity and a larger volume of bone graft compared to AICBG at approximately 58 mL.3,10 Fractures of the donor’s bone have been reported in up to 10% case series using RIA.9

In a massive, uncontained calcaneus bone defect with compromised soft tissues secondary to blast trauma or osteomyelitis, the following options have been described: vascularized iliac crest, fibula, and rib grafts. This is part of a complex osteocutaneous flap to reconstruct the calcaneus and fuse the subtalar joint if necessary.11-14 Opportunistic grafting using the “spare parts” concept is also described. This is when a body part from a contralateral amputation is used as autograft.15

Structural allograft such as fresh frozen femoral head is an alternative option to autograft for managing a bony defect.16 It has the distinct advantage of avoiding the donor site morbidity whilst reducing the operative time and inpatient stay.16,17 It can be sculptured to the defect, acting as an osteoconductive scaffold. Allografts can provide larger volumes of graft than autografts, especially if one has access to a Regional Bone Bank.16-18 One of its disadvantages is the longer incorporation time due to diminished or absence of osteoinductive properties, compared with autografts.19 Graft rejection secondary to immune response and disease transmission from the donor have also been described.5,19

Demineralized bone matrix (DBM) is a convenient option, as it is more readily available.5,18 It is highly osteoconductive and can be added to autogenous bone grafts as a graft extender but its osteoinductivity is relatively limited.3 DBM is frequently described in the treatment of a contained bone defect, following curettage of unicameral bone cysts in the calcaneus.20 It is available in a powder or chip formulation, permitting percutaneous filling of the defect with minimal patient morbidity, and a shorter hospital stay.20

Calcium sulfate and calcium phosphate cement are two of the most extensively studied bone graft substitutes for the management of bone defects with or without auto- or allografts.21 Both are biocompatible, are available in an injectable formulation that hardens at body temperature, and contain osteoconductive properties.21 Calcium sulfate resorbs faster and allows for the ingrowth of vascular and new bone formation as it resorbs.21 One of its disadvantages is the weak internal strength that prevents it from acting as a structural scaffold and limits its utility to small bone defects with rigid internal fixation.21 A hybrid calcium sulfate biocomposite with hydroxyapatite (Cerament®) may provide superior structural support, mimicking real bone integration.19 The injection of Cerament® around a contained void has also shown increased screw purchase and pull-out strength by 100-200%.22,23

Since 1995, additive manufacturing technologies including three-dimensional (3D) printed custom implants have gained increasing attention for the management of bone defects.24 In particular, 3D printed titanium alloy implants have been used to fill massive bone defects primarily in the setting of limb salvage following tumor resection.25 The main perceived advantage is its biocompatibility with the ability to be personalized to fit the defect’s shape and size.26

A 43-year-old female nurse presented with an avulsion fracture of the base of the 5th metatarsal of the left foot in January 2017. There was no history of trauma. The patient was an active cigarette smoker. After an initial orthopedic review, this was treated conservatively in a Velcro boot. After 2 months of conservative management, the patient continued to have pain and no evidence of callous formation on repeat radiographs. On further clinical examination, it was noted that the patient had a varus hindfoot.

To treat the 5th metatarsal fracture and concurrently address the varus, a lateralizing calcaneal osteotomy was performed, using a step plate as a fixation. After a prolonged period, the calcaneus failed to unite (Fig. 1), leading to revision surgery 18 months after the index procedure using two 6.5 mm cannulated screws. Infection was ruled out prior to the operation via laboratory investigations including CBC, CRP, ESR, and the patient was counseled on cigarette cessation and calcium and vitamin D supplementation. 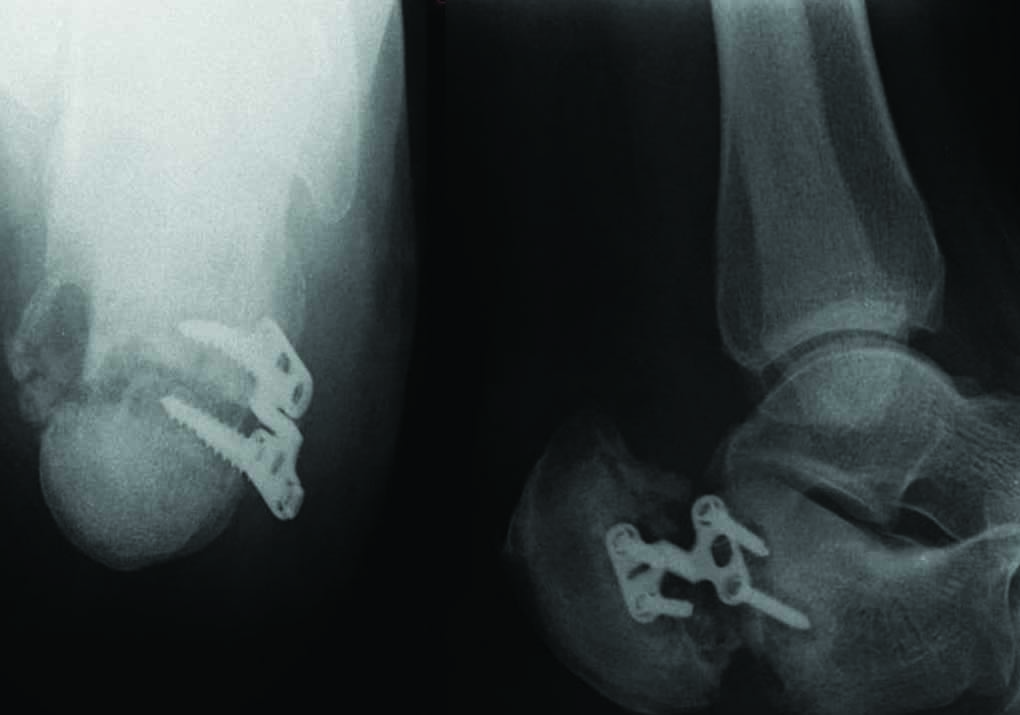 Further nonunion and metalwork failure resulted in 3 months and a third fixation procedure was undertaken with a screw plus lateral plate construct. Five months after this procedure the metalwork failed again (Fig. 2) due to nonunion and mechanical overload. Throughout this time the patient was unable to work and struggled severely with pain and immobility, leading to increased BMI (54). 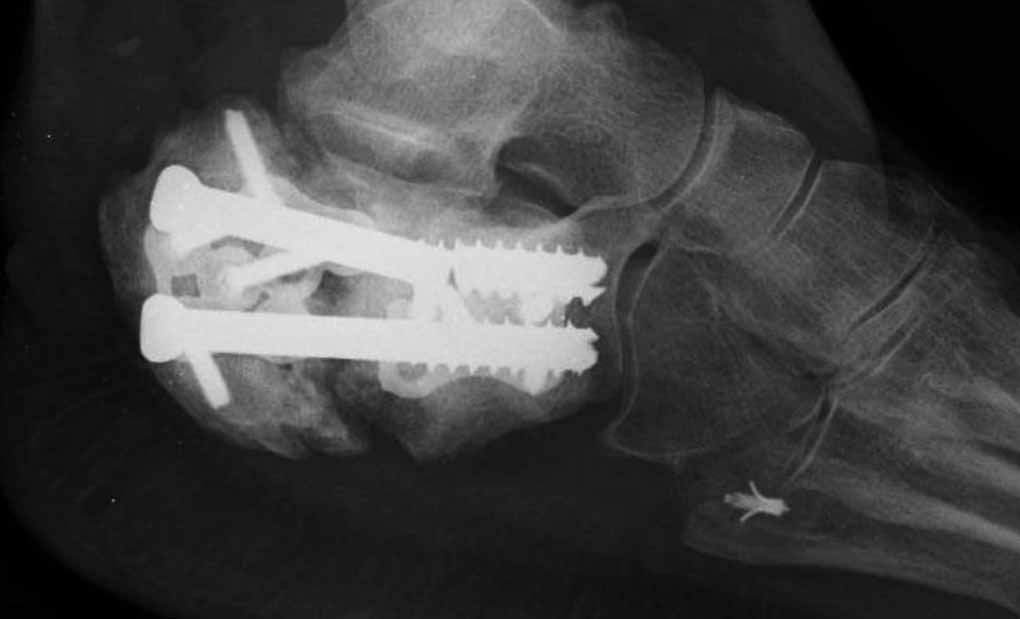 The decision was made to proceed with a staged limb salvage reconstruction at this stage. In the first stage, thorough debridement of the calcaneus and removal of all metalwork with deep tissue sampling was performed. This resulted in a large uncontained bone defect in the calcaneus tuberosity (Fig. 3). A 3-month gap was taken to allow the wound to heal and to treat the chronic infection with antibiotics. In the second stage, the calcaneal bone defect was treated utilizing a tricortical iliac crest graft and medullary femoral autograft (harvested via RIA). A piecemeal subtalar fusion was performed using cannulated screws and a lateral plate construct. An injectable synthetic void filler was also used to fill the remaining gaps and screw holes. 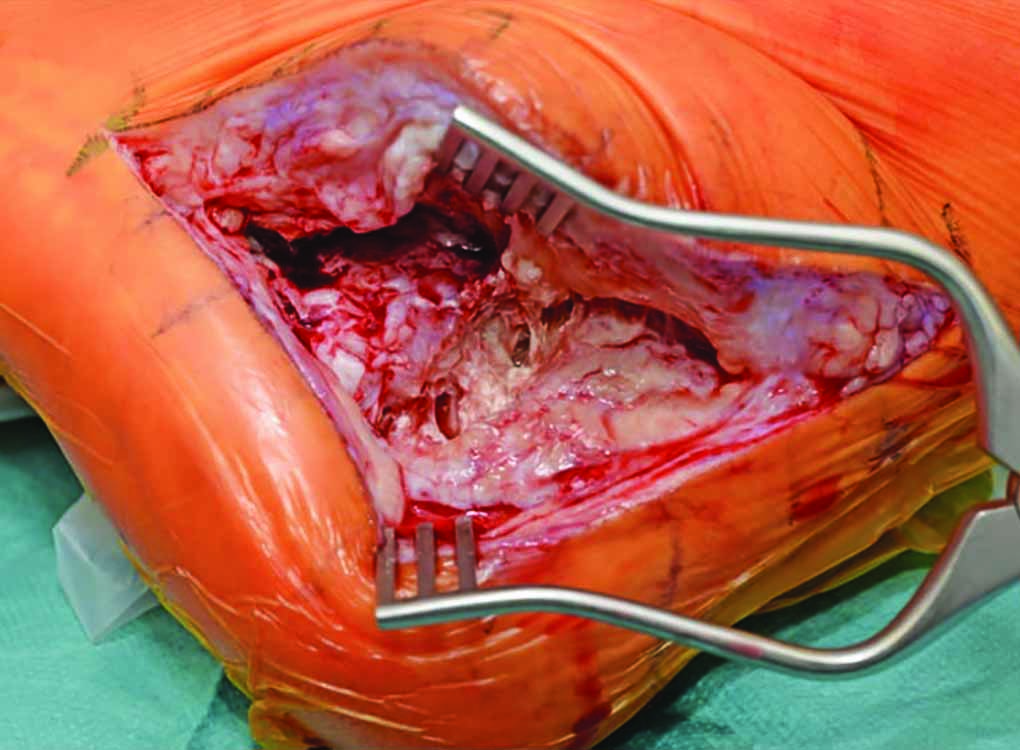 The patient was positioned in the lateral decubitus position. The skin was prepared from the affected foot to the ipsilateral hemipelvis. This was to facilitate the harvest of both tricortical iliac crest bone graft and medullary femoral autograft via RIA. The primary surgeon approached the calcaneus via an extensile lateral approach (using the previous incision) and performed a thorough debridement and deep tissue sampling for microbiology. At the same time, a second surgeon harvested a large tricortical graft from the iliac crest and subsequently reamed the femoral canal utilizing RIA to harvest medullary canal graft (Fig. 4A).

Figs 4A and B: (A) Reamer-Irrigator-Aspirator (RIA) on the ipsilateral left femur. (B) Filling in the uncontained bony defect with tricortical iliac crest autograft and bone marrow autograft from RIA

The subtalar joint surfaces were then prepared for fusion using a burr and curette. The tricortical graft was prepared into three sections and was decorticated using a handheld burr. This was utilized as a strut graft to fill the defect in the calcaneus (). The autograft from RIA was packed around this. Once the graft was positioned and the calcaneal shape and position were deemed acceptable, guidewires were passed under fluoroscopic guidance through the reconstructed calcaneus, across the subtalar joint, and into the talus. A mixture of partially and fully threaded 6.5 mm cannulated screws were used to hold the construct, with a further 5-hole straight plate on the lateral border of the calcaneus to support the graft. We also injected the gentamicin-loaded synthetic Cerament® to fill the screw holes that were remaining (Fig. 5). The wound was gently washed out and 1 gm of vancomycin powder was inserted along its length. A negative pressure VAC dressing was then applied, and the foot was immobilized in a boot for 2 months, nonweight bearing.

The patient has been followed up for 12 months. The wounds have completely healed (Fig. 6). And she is ambulating without any aids. Radiographs demonstrate bony union within the calcaneus and the subtalar joint at one year (Fig. 7). 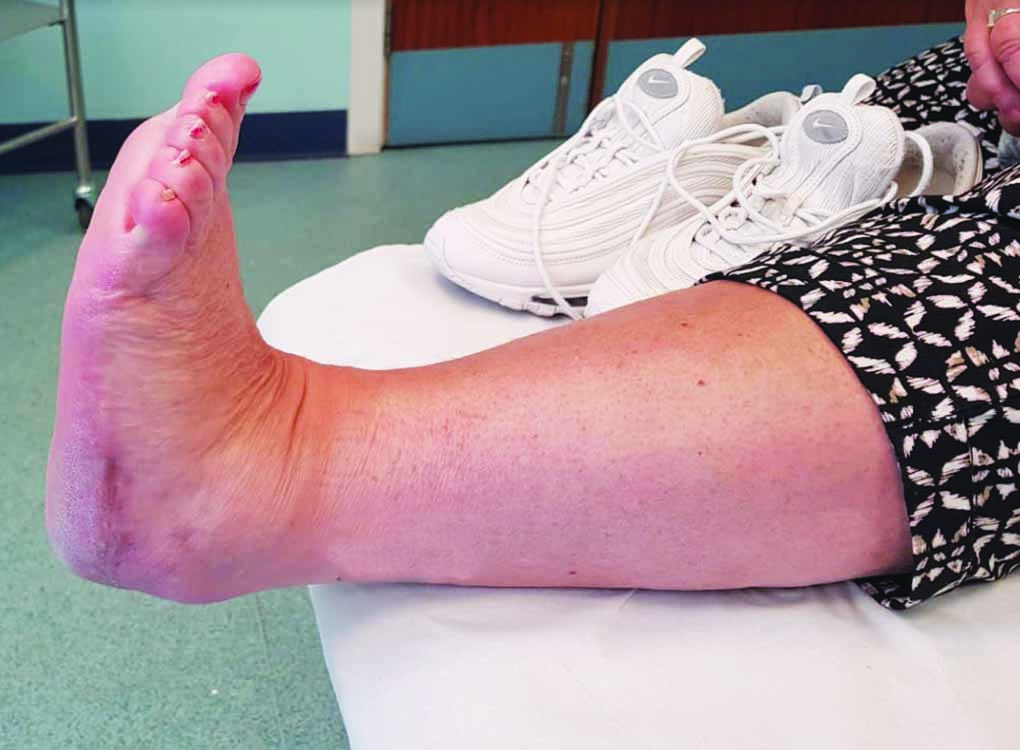 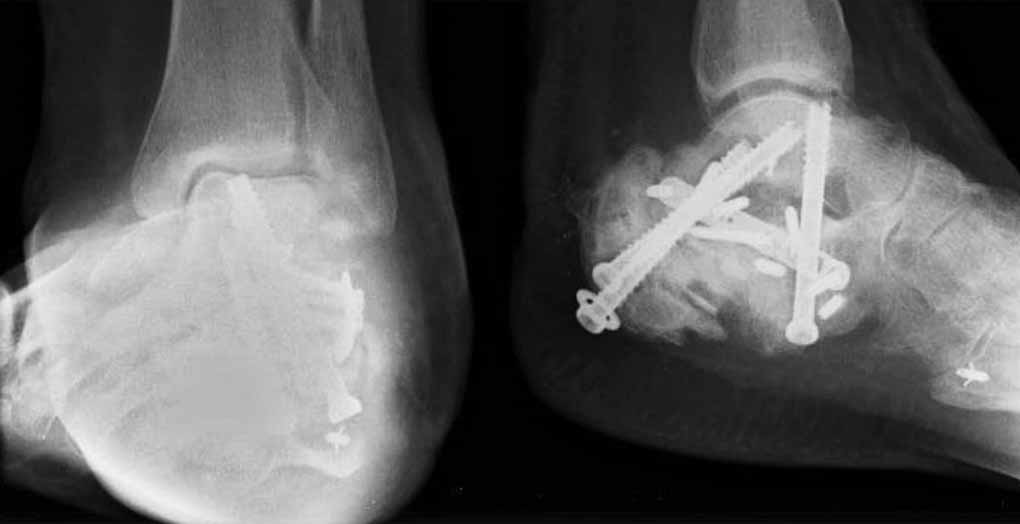 We decided to maximize our graft volume and biology by combining the tricortical iliac crest bone with the femoral medullary autograft obtained from RIA. We decided against using an allograft given its potential risk of further nonunion particularly with the patient actively smoking cigarettes. Cerament® bone void filler was added to fill up the screw holes to augment the structural support provided by the iliac crest. Additionally, this also provided a steady release of gentamicin to decrease the chance of further infection. Despite the complexity of the case, we did not feel that a custom metallic implant was indicated, especially given the size and the location of the bone defect.

Autograft, allograft, bone graft substitutes, and custom implants are all viable options to manage bone defects in the calcaneus. The options chosen will be dictated whether the defect is contained or not (Figs 8 and 9). The current evidence is weak and is primarily based on retrospective case reports and small case series. The benefits and risks of each option must be carefully evaluated to the specific patient and defect prior to proceeding, to secure an optimal patient outcome. 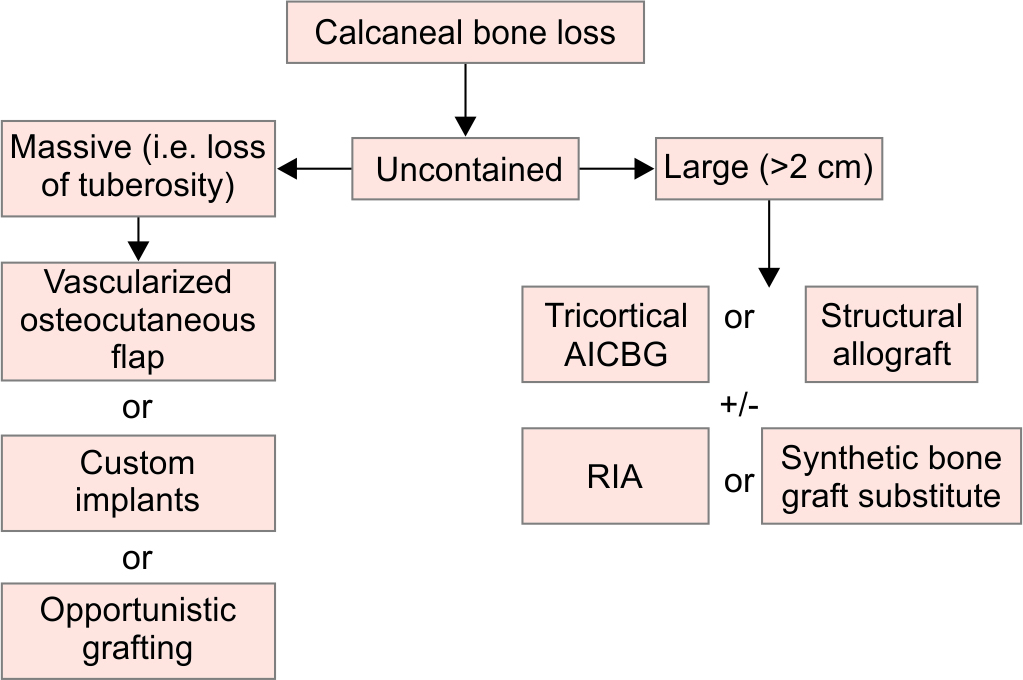 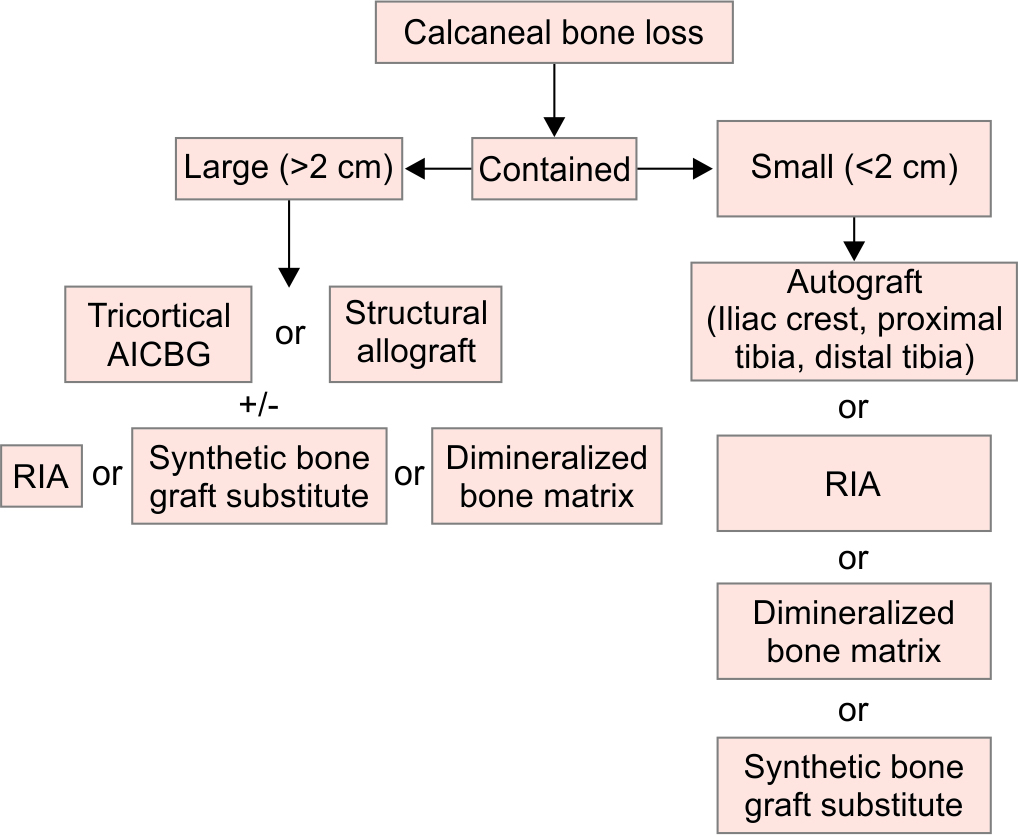 III; Retrospective case series with Review of the Literature

GRANTS AND OTHER ACKNOWLEDGMENTS

The authors received no financial support for the research, authorship, and/or publication of this article.