Syndesmotic Screw: Where does It Break?

Conflict of interest: None

Aim and objective: There is an increasing body of evidence that syndesmotic screws following stabilization of acute syndesmotic disruption in ankle fractures can be retained if not symptomatic. Some broken screws may remain symptomatic (pain, cortical erosion) and can be difficult to remove. This study aimed to evaluate at what level the syndesmotic screw breaks and how often this occurs at a level that may lead to potential refractory complaints needing further surgical intervention.

Results: A total of 51 broken syndesmotic screws remained for analysis. The largest amount of screws (22 screws, 43.1%) broke at the level of the lateral tibial cortex. One of the screws broke in-between the fibula and tibia. The need for complete removal of a broken screw (including the medial part) was seen in six screws (11.8% of all broken screws).

Conclusion: Albeit broken syndesmotic screws are encountered frequently, the number of locations with possible clinical consequences was low. The need for the complete removal of a broken screw was low.

Clinical significance: Retaining the syndesmotic screw should be the new gold standard.

There is an increasing body of evidence that syndesmotic screws following stabilization of acute syndesmotic disruption in ankle fractures can be retained if not symptomatic.1,2 Several systematic reviews have shown similar outcomes in patients with syndesmotic screws removed or retained, including those that were broken.1,3,4 Most retained screws in time either show loosening5,6 or break-in up to 36% of cases.7–10 One study even showed the highest outcome scores in the group of patients with a broken syndesmotic screw.10 It, however, remains unclear if this depends on the level and location of screw breakage, whereas one of the hypothetical assumptions is that intraosseous breakage might be associated with more pain.11 In addition, it has been found that significantly more screws break in younger and male patients.12 Some broken screws may remain symptomatic (pain, cortical erosion) and can be difficult to remove.11,13–15

However, there is currently no clear evidence at what level the syndesmotic screw predominantly breaks. Only anecdotal comments exist that the screw “typically fails between the fibula and tibia”13 or at an “inconsequential location”.14

This study aimed to evaluate at what level the syndesmotic screw breaks and how often this occurs at a level that may lead to potential refractory complaints needing further surgical intervention.

Over time, the preferred strategy at our hospital for syndesmotic screws became removal on demand. All consecutive cases with a surgically treated ankle fracture and subsequent placement of one or more syndesmotic screws were included. Patients were treated between 1-1-2015 and 1-8-2020.

Only patients above the age of 16, with at least 6 months of follow-up were included, with follow-up radiographs available.

Patients were entered in the database based on the number of syndesmotic screws, in other words, a patient with two screws was entered twice to collect the different parameters per screw. Patient characteristics were obtained per patient.

The following items were obtained from the electronic patient charts and digital radiographs.

Patients with screw removal before breakage were excluded from further analysis.

The level of syndesmotic screw breakage was divided into six potential different patterns (Fig. 1). Intraosseous breakage was considered locations with possible consequences, as breakage in the fibula or tibia would not restore physiological movement in the syndesmosis. The need for subsequent removal of the complete broken syndesmotic screw was recorded. 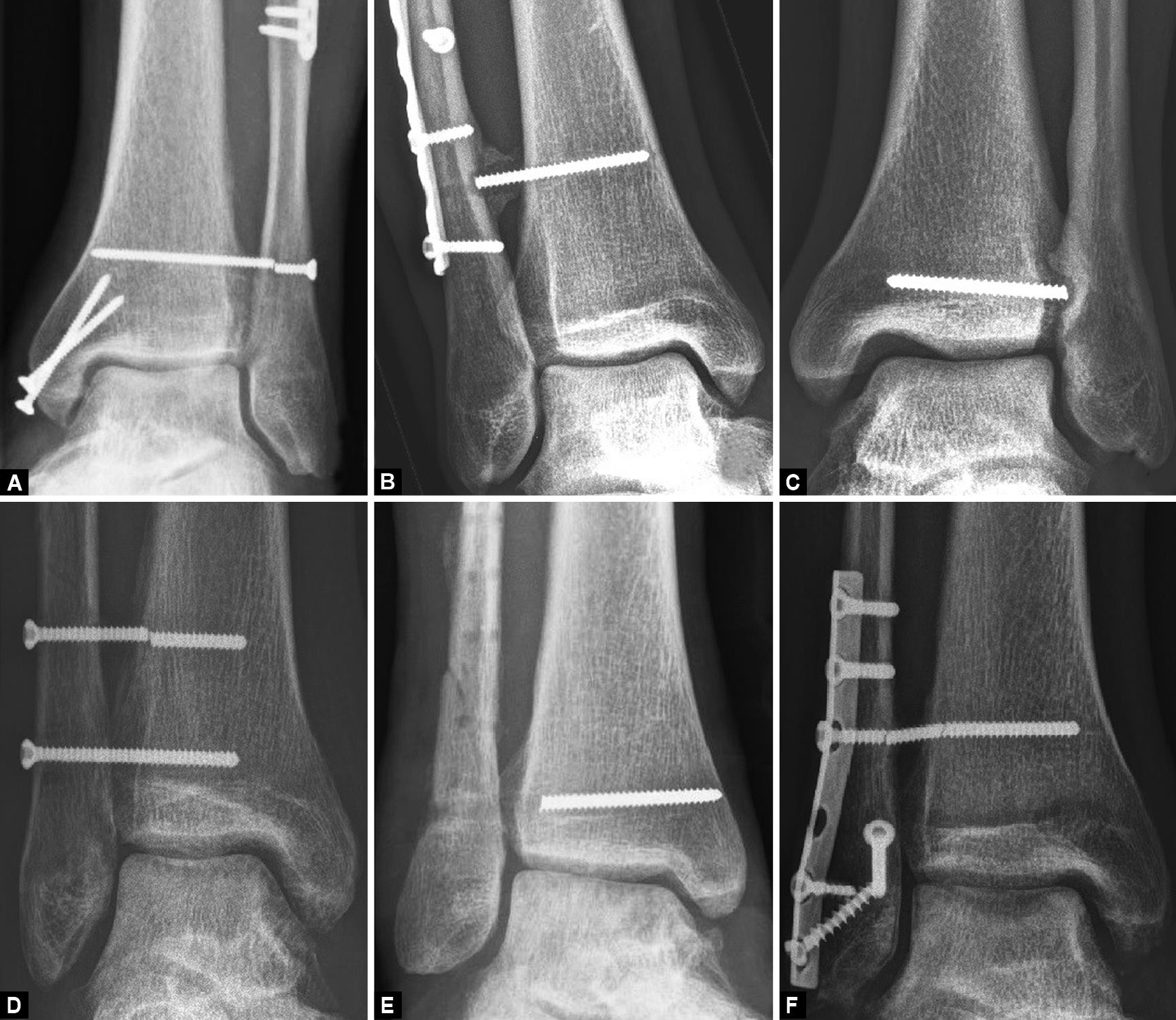 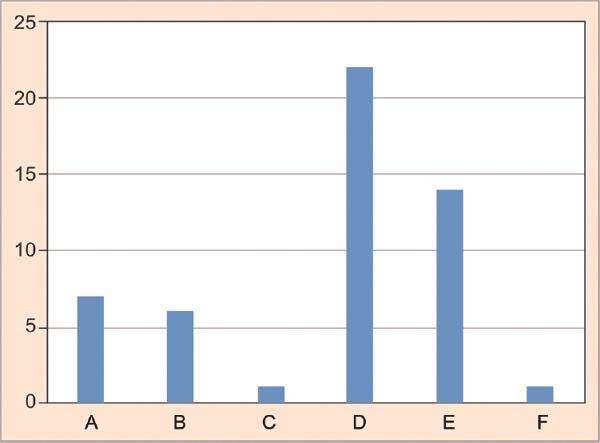 Fig. 2: Distribution of different screw breakage patterns. The letters on the X-axis correspond to the classification in Figure 1

Potential consequential location of breakage (intraosseous in the fibula or the tibia) was seen in a total of 21 screws (41.2%) of which eleven screws were removed (52.4%).

None of the patient or surgical characteristics were associated with a specific breakage pattern.

Approximately half of the retained syndesmotic screws with sufficient follow-up eventually broke in this study. Most of the screws broke at the level of the tibial and fibular cortex. These broken screws most likely will not interfere with the physiological movement of the tibia and fibula. However, 21 out of 51 screws broke intraosseous in the tibia or fibula, potentially leading to limitations in normal movement.11 Cortical erosion might be seen in this case, when the remaining medial part is not shortened or removed (Fig. 3).

In our study group, a relatively high percentage of the removed broken screws were only removed on the lateral side with a residual medial part inside the tibia (45.1%). This raises the hypothesis that the experienced complaints before removal are mainly due to the lateral plate and screws and the medial residual material can safely remain in situ, which avoids an extra medial approach.

Complete removal of broken screws is a more challenging surgical procedure. Technical tips include removal using a hollow drill-bit via the medial cortex or forcing the screw out via the fibula after removing the lateral part of the screw.13,14 This more complex surgery might come with an increase in postoperative complications compared to the numbers found by Sanders et al. who found a mean percentage of 4% surgical site infections while removing the syndesmotic screw.16

The biomechanical effects of syndesmotic screws have been investigated thoroughly. However, only cadaveric data are available on intact screws17,18 showing a decrease in tibiotalar external rotation17 and decrease of dorsiflexion and plantarflexion.18 Contradicting biomechanical differences have been found between size and number of screws.19,20 However, studies reporting on 4.5 mm screws show lower rates of screw breakage compared to 3.5 mm screws.8 However, the different percentages of screw breakage throughout the literature may also be at least partially be explained due to differences in duration of follow-up. 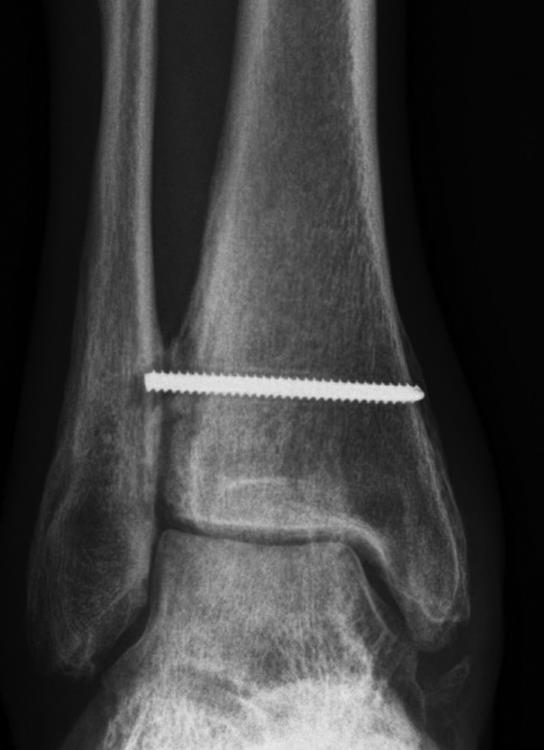 Fig. 3: Cortical erosion of the fibula by a retained syndesmotic screw

As stated before, several studies show no difference in outcome scores between retained and removed screws.1,7,10 Additionally, the only randomized trial thus far showed no significant difference in range of motion (plantar and dorsiflexion) between patients with removed or retained screws.7 In the retained group (n = 25) some screws (n = 2) were eventually removed, 4 were intact and showed no loosening, 10 had a loose screw, and 9 a broken screw.7 No conclusion could be made between loosening screws or broken screws in relation to a range of motion.12 Therefore, we should specifically select patients with symptomatic syndesmotic screws for implant removal.2

This retrospective study certainly has some limitations. The diagnosis of a broken screw was made on follow-up conventional radiographs. This could have led to miss-classification regarding the level of breakage. Especially for screws placed at the level of the syndesmosis (trans-syndesmotic), it was difficult to classify between screw breakage in the tibia, in-between the cortices, or at the level of the cortex. A similar issue arose for the screws at a higher level where it was more challenging to measure if they were broken at the lateral tibial cortex or in the tibial medullary canal, because of the triangular shape of the tibia shaft (Fig. 4). When we compare the locations of breaking material with Ibrahim et al., we notice that in our study group only one screw broke in the joint between tibia and fibula (2.0% of broken screws), while their cohort had a larger percentage which broke in the tibiofibular clear space (25.6%).11 For an accurate assessment of the location of the breaking point in the screw, a CT scan would be more accurate.

Additionally, further relevant comparison with this study shows that Ibrahim et al. removed 59.4% of intraosseous screws, wherein in our cohort 11 of 21 intraosseous screws were removed (52.4%). This suggests that the indication for implant removal should be based on complaints instead of the location of the break in the syndesmotic screw.

Two studies have shown a secondary reduction effect on pre- and post-CT scans in slight mal-reductions of the syndesmosis following screw removal.21,22 For future research, it may be of interest to have postoperative and post-screw breakage CT scans to evaluate whether this same secondary reduction effect occurs following screw breakage. In addition, this may show if slight mal-reduction of the fibula in the tibia-notch contributes to higher rates of screw breakage. 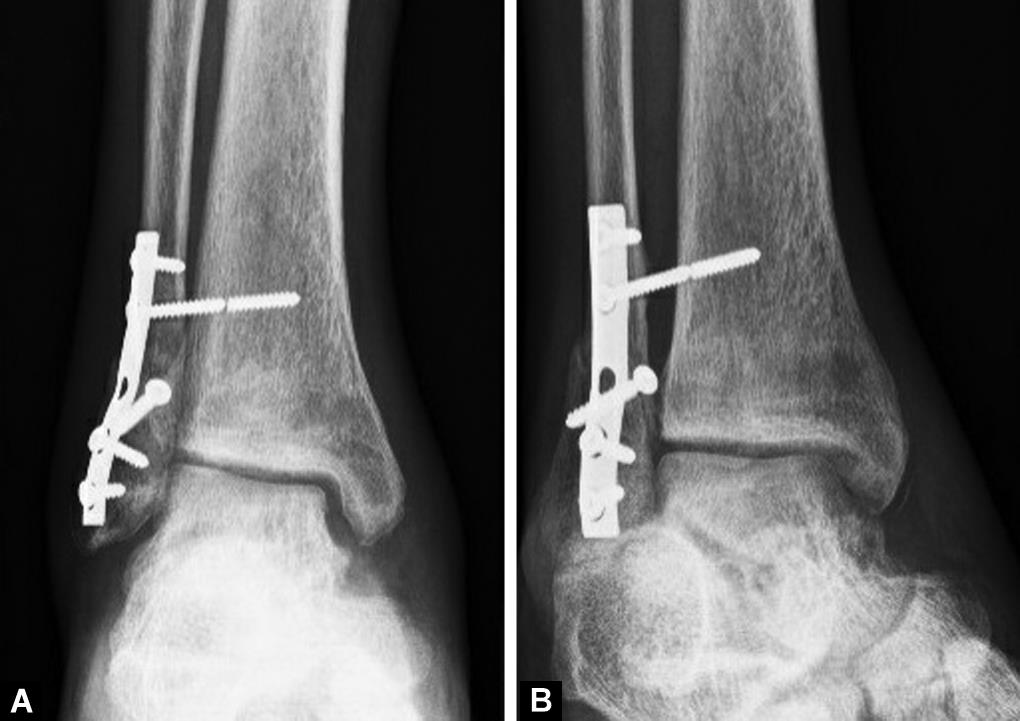 Not including patient-related outcome scores (PROMs) is a second limitation of the study. Although it may seem conceivable that certain screw breakage patterns may lead to more residual complaints than other patterns, we did not prove that with this study. Despite Hamid et al. showed favorable outcome scores in patients with broken screws, future studies may include PROMs to further clarify the findings of this study.10

Albeit broken syndesmotic screws are encountered frequently, the number of locations with possible clinical consequences was low. The need for removal of a broken screw (including the medial part) was seen in 6 out of 51 broken screws (11.8%). This would support that retaining the syndesmotic screw should be the new standard.

Retaining the syndesmotic screw should be the new gold standard.